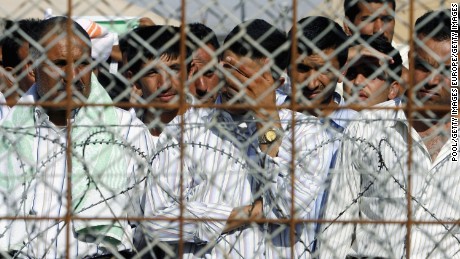 (CNN)Here’s some background information about the Abu Ghraib prisoner abuse scandal which took place during the Iraq war.

Facts:
Abu Ghraib prison was a U.S. Army detention center for captured Iraqis from 2003 to 2006.

The prison was located 20 miles west of Baghdad on 280 acres.

At the height of the scandal, the prison held as many as 3,800 detainees.

Most of the detainees lived in tents in the prison yards.

The abuses took place inside the prison in cell blocks 1A and 1B.

Eleven U.S. soldiers were convicted of crimes relating to the Abu Ghraib scandal. Seven of those were from Maryland-based 372nd Military Police Company. A number of other service members were not charged but reprimanded.

Timeline:
November 2003 – A detainee dies during an interrogation at Abu Ghraib Prison.

November-December 2003 – Photos are taken of naked Iraqi detainees being humiliated.

January 2004 – Spc. Joseph M. Darby discovers photos on a CD-ROM of Iraqi prisoners being abused. He reports the abuse to superiors, prompting an investigation.

April 30, 2004 – The New Yorker publishes an article by Seymour Hersh reporting details in the Taguba report on the abuses at Abu Ghraib.

Taguba’s report stated that the following abuses happened in this incident:
– Punching, slapping, and kicking detainees; jumping on their naked feet.
– Videotaping and photographing naked male and female detainees.
– Forcibly arranging detainees in various sexually explicit positions for photographing.
– Forcing detainees to remove their clothing and keeping them naked for several days at a time.
– Forcing naked male detainees to wear women’s underwear.
– Forcing groups of male detainees to masturbate themselves while being photographed and videotaped.
– Arranging naked male detainees in a pile and then jumping on them.
– Positioning a naked detainee on a box, with a sandbag on his head, and attaching wires to his fingers, toes, and penis to simulate electric torture.
– Writing “I am a Rapest (sic)” on the leg of a detainee accused of rape, and then photographing him naked.
– Placing a dog chain or strap around a naked detainee’s neck and having a female soldier pose for a picture.
– A male MP guard having sex with a female detainee.
– Using military working dogs (without muzzles) to intimidate and frighten detainees, and in at least one case biting and severely injuring a detainee.
– Taking photographs of dead Iraqi detainees.

May 4, 2004 – Gen. George W. Casey Jr. announces that in the past 16 months the U.S. Army has conducted more than 30 criminal investigations into misconduct by U.S. captors during both Operation Iraqi Freedom and Operation Enduring Freedom.

May 5, 2004 – President George W. Bush records interviews with Al Arabiya and U.S.-sponsored Al-Hurra networks expressing his disgust with the mistreatment of Iraqi detainees.

May 6, 2004 – In a joint news conference with King Abdullah II of Jordan, President George W. Bush says he’s told the king he’s “sorry for the humiliation suffered” by Iraqi prisoners at the hands of U.S. troops in Iraq.

May 6, 2004 – The Justice Department announces that it is looking into three suspicious deaths of detainees, two in Iraq and one in Afghanistan, and the involvement of the CIA and contractors in the deaths.

May 7, 2004 – Secretary of Defense Donald Rumsfeld testifies before the Senate and House Armed Services Committees. “These events occurred on my watch…as Secretary of Defense, I am accountable for them and I take full responsibility…..there are other photos — many other photos — that depict incidents of physical violence towards prisoners, acts that can only be described as blatantly sadistic, cruel, and inhuman.”

May 10, 2004 – President George W. Bush views some of the photos at the Pentagon and announces his firm support for Donald Rumsfeld.

May 12, 2004 – Secretary testifies before the Senate Appropriations Subcommittee.

August 24, 2004 – An independent commission headed by former Secretary of Defense James Schleslinger reports that what took place at the prison was due largely to “sadism” on the part of officers working the night shift, but that responsibility for the mistreatment of prisoners went higher up the chain of command, back to Washington, DC.

August 25, 2004 – The Fay-Jones report on the Abu Ghraib prison scandal finds 44 instances of abuse, some of which amounted to torture.

February 15, 2006 – A new set of graphic photographs and video from Abu Ghraib are aired on the Australian television network SBS’s program “Dateline.” The photos are reportedly from the same period in 2003 that the previous photos were shot, not new incidents.

June 1, 2006 – Sgt. Santos Cardona, from the 42nd Military Police Detachment at Fort Bragg, North Carolina, accused of using his animal to threaten detainees at Abu Ghraib prison, is found guilty of two of five counts against him, including aggravated assault and dereliction of duty.

September 1, 2006 – Control of the Abu Ghraib Detention Facility is handed over to the Iraqis after all of the detainees are transferred elsewhere.

November 2007 – A class action lawsuit on behalf of 212 prisoners alleging abuse at Abu Ghraib by CACI Intl Co. contractors is allowed to proceed in federal court.

April 2014 – Iraq closes the prison due to security concerns.

Players:
Spc. Megan Ambuhl
372nd Military Police Company
October 30, 2004 – As part of a plea deal, Ambuhl pleads guilty to one charge of dereliction of duty. She is discharged from the Army without prison time.

Pfc. Lynndie England
372nd Military Police Company
May 2, 2005 – England pleads guilty to reduced charges as part of a pretrial agreement.
May 4, 2005 – A mistrial is declared after she pleads guilty but then states that she did not know her actions were wrong.
September 21, 2005 – England’s second court-martial trial begins at Fort Hood, Texas.
September 26, 2005 – England is found guilty of four counts of maltreating detainees, one count of conspiracy and one count of committing an indecent act.
September 27, 2005 – Is sentenced to three years in prison and given a dishonorable discharge.
March 2007 – Is released from military prison after serving half of her 36-month sentence.
2009 – Releases her biography, “Tortured: Lynndie England, Abu Ghraib and the Photographs that Shocked the World.”

Staff Sgt. Ivan “Chip” Frederick II
372nd Military Police Company
October 20, 2004 – Pleads guilty to conspiracy, dereliction of duty, maltreatment of detainees, assault, and committing an indecent act under a plea agreement.
October 21, 2004 – Is sentenced to eight years in prison and also sentenced to a forfeiture of pay, a dishonorable discharge and a reduction in rank to private.
October 1, 2007 – Is paroled after serving approximately three years in a military prison.

Spc. Charles Graner
372nd Military Police Company
January 14, 2005 – Graner is found guilty of nine of 10 counts under five separate charges.
January 15, 2005 – Graner is sentenced to 10 years in prison, downgraded to the rank of private with loss of pay, and receives a dishonorable discharge.
August 6, 2011 – Graner is released from prison.

Spc. Sabrina Harman
372nd Military Police Company:
May 16, 2005 – Is found guilty on six of the seven charges for her role in the Abu Ghraib prison abuse scandal.
May 17, 2005 – Sentenced to six months in prison. Harman is demoted to private, and receives a bad conduct discharge after she finishes the sentence.

Lt. Col. Steven L. Jordan
Director, Joint Interrogation and Debriefing Center during the fall of 2003. Jordan is the only officer charged with prisoner abuse.
April 28, 2006 – Charged with eight counts, including disobeying an order, dereliction of duty, cruelty, false statements, fraud and interfering with an investigation.
August 28, 2007 – Acquitted of charges that he failed to control soldiers who abused detainees, but is found guilty of disobeying a general’s command not to talk about allegations of abuse at the prison. On August 29, he is sentenced with a reprimand.
January 10, 2008 – Cleared of all wrongdoing, and the conviction and reprimand are removed from his record.

Brig. Gen. Janis Karpinski
Commander of the Army Reserve’s 800th Military Police Brigade, in charge of all 12 Iraqi detention facilities, including Abu Ghraib.
May 5, 2005 – She is demoted from brigadier general to colonel by President George W. Bush after an extensive investigation and is cited for two of four allegations against her, dereliction of duty and shoplifting. The probe clears her of “making a material misrepresentation to an investigating team” and “failure to obey a lawful order.”

Lt. Col. Jerry L. Phillabaum
Commander, 320th MP Battalion.
April 2004 – He is reprimanded and relieved of command of the 320th Military Police Battalion for his role in the abuse scandal.

Spc. Jeremy Sivits
372nd Military Police Company
May 19, 2004 – Sivits pleads guilty as part of a pretrial agreement with prosecutors that leaves him open to testify against other soldiers charged in the scandal. He is sentenced to a year of confinement, discharge for bad conduct, and is demoted.