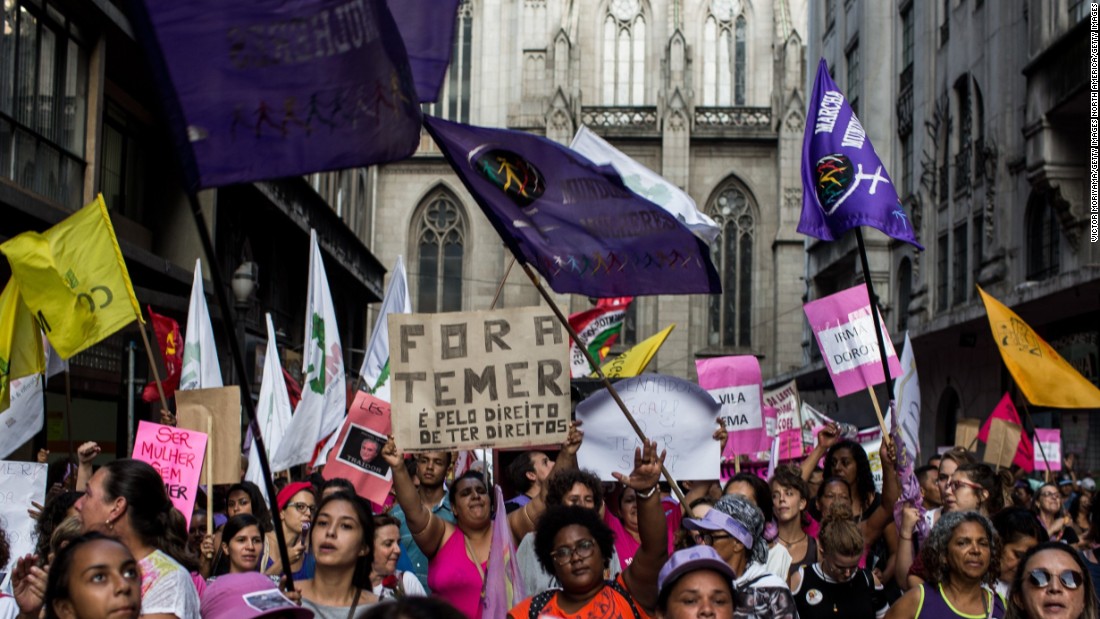 (CNN)Brazilian President Michel Temer has sparked a wave of anger following a speech to mark International Women’s Day, with his references to women’s domestic roles drawing accusations of sexism on social media.

Wednesday’s speech began cordially enough, with compliments to female representatives of the Senate and Lower House, who were present at the event at the Planato presidential palace.
He highlighted the importance of women’s struggles in Brazil, from gaining equal voting rights to fighting femicide.
He compared the country’s successes to others who still treat women as “second class citizens,” and praised his wife Marcela and other women in his life for everything they do “in the house, in the home and for their children.”
While these comments may have led to some tepid applause and barely noticeable eye rolls, it was his praise of women’s “economic contributions” that left both men and women across social media in Brazil flabbergasted.
“Nobody is more capable to pointing out the unbalances in, let’s say, supermarket prices than women,” Temer said.
“Nobody is more capable of detecting eventual economic fluctuation than women, since they monitor the increases and decreases of their home’s budgets.”
The comments were quickly seized upon by Brazilians, many of whom considered them sexist.
“Really Temer, the role of women in the (economy) only is to check supermarket prices? With us earning less and working a lot more?” one said.
Brazilian journalist Andre Trigueiro said Temer’s “vision” reminded him of biblical references that equate women to Adam’s rib.
Another user, Monica Canejo, drew a distinction between his comments and the role of his cabinet’s advocate for women.
“If you think your job is tough, imagine how the (Special Secretary of Policies for Women) feels,” she tweeted.
Tragedies bookended Brazil’s year in the spotlight

The online vitriol is symptomatic of a wider criticism of Temer and his new government.
They come as Brazil faces one of the worst and longest recessions in recent history. Its latest GDP report showed the country’s economy contracted by 3.6% and unemployment is on the rise at a whopping 12.6%.
Temer, one of the key players that led the charge to impeach Dilma Rousseff — Brazil’s first female president — has suffered from extremely low approval ratings since assuming the executive office last September. Temer was a former ally of Rousseff and her vice-president.
His popularity has barely reached double digits and dipped even further after he passed aggressive austerity measures, freezing public spending on services like health and education for the next 20 years.
All this as a colossal corruption scandal has led to the arrest of dozens of business leaders and politicians who embezzled billions from the country.
Protests erupt in Brazil over controversial 20-year austerity plan

Hundreds of thousands of people took to the streets in several Brazilian cities Wednesday, defending women’s rights and protesting the Temer government.
Marchers carried signs and waved flags. One sign declared: “They want us as first ladies, never as presidents.”
Protestor Alejandra Vargas said she went to a march in Rio de Janeiro’s city center to set an example for her infant daughter, who she was carrying in tow.
“When I became a mother and knew it was a girl I knew I had a responsibility for her,” Vargas said. “This fundamentalist thinking of women, that their place is only at home, is threatening what we’ve already gained.”