Virtual reality is finally here, and surprisingly we’ve been doing a pretty good job of not (yet) using it for evil. Jacking off will always be the first thing people revolutionize when a new tech rolls into town, of course, but even though VR was created about eight minutes ago, people are already using it to vastly improve other big things like education and medical care, along with small, everyday things you didn’t realize could be a lot better in virtual reality. You can thank the VR engineers who diverted their attention away from the virtual tits bouncing against their corneas long enough to innovate the following areas.

Gaming is the driving force of the VR economy, for now. At the same time, every other area of entertainment is pumping their R&D departments with cash and Adderall until they manage to jam this sexy new technology into their own forms of fun. And theme parks are going to jump all over it so they can use it as an excuse to increase ticket prices from astronomical to just a picture of Mickey Mouse giving you the finger. 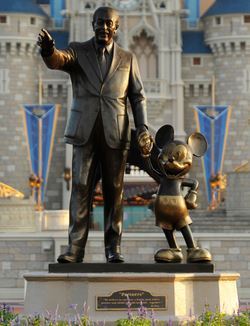 Inscription: “Your destitute children will never know our wonders,
and it’s your fault. Love, Walt. P.S. Suck it, Jews!”

Six Flags was the first theme park to show off the new way tourists would be vomiting all over each other’s neon fanny packs when they unveiled their partnership with Samsung to create a virtual reality experience combined with preexisting roller coasters. You simply strap in and put on a VR headset, which projects a movie that syncs with the movements of the roller coaster, because apparently 55 mph upside-down loop-the-loops on a runaway train car were boring us jaded bastards to tears.

The New Revolution VR-coaster is basically an on-rails first-person shooter like House Of The Dead or Time Crisis. Riders dive and careen through a city being invaded by aliens. By tapping on the side of their VR goggles they can shoot the aliens out of the sky, or, more likely, punch themselves in the head with the force of a roller coaster as they try. And while you no longer have to worry about communal plastic gun handles giving you chlamydia, be prepared for what we can only assume will be a huge pink-eye outbreak.

Meanwhile, Acer is working on a VR helmet specifically for theme parks and arcades, and there’s a company based in Utah that runs a VR laser-tag park called “The Void” that’s going to have an outpost in Times Square by this summer. And that’s just the beginning. Since by all accounts this new generation of VR is legit, the tech is probably destined to quickly become a staple of overpriced roadside tourist traps run by sketchy guys with NASCAR-branded sunglasses.

#4. VR Will Make You Feel The News

Even if you regularly make an effort read and watch the news, it can still be difficult to fully empathize with the people featured in it. Without firsthand experience all you can do is use the information to paint as vivid a mental image as you can as you imagine their struggles. Virtual reality is already changing that by making the news more impactful and more emotionally resonant. If VR can convince people they’re falling off a building when they absolutely know they’re walking on solid ground, just think of how tangible and, frankly, painful it would be to experience the struggle of someone thousands of miles away.

The New York Times is experimenting with that kind of storytelling right now. Anyone with a VR headset, even the simple ones that are just a smartphone in a cardboard box, can experience the unsettling sense of physical presence within the stories they report in virtual reality. The sight of people praying and crying at a vigil honoring the lives lost in the November 2015 terrorist attacks in Paris is made so much more powerful in VR than as a picture on the front page of a newspaper or a 2D video on a website.

Same goes for this VR report titled “The Displaced,” about three refugee children who fled their homelands to escape war and certain death.

Now, the question is, would this make people more empathetic to the struggles of strangers, or would it go the other way and harden the resolve of people who couldn’t give a shit about other people’s problems? I assume it’d be a mix of the two, with one set becoming hyper-empathetic and another growing ever more callous. And it would have to be an almost super-villainous level of callousness, since they’d be looking the plight and pain in the eyes, to the point where even the Grinch’s heart would grow three sizes and still wouldn’t be satisfied with the degree of closeness because the goggles don’t allow them to tell those people to stop being little bitches and that a little genocide never hurt anyone.

My brain got its ass kicked the first time I saw an online ticket vendor offer a computer-generated approximation of the view from the seat I’d selected. I guess I’ll be soaring to the basketball game in my flying car and eating my $14 hot dog in pill form, because the future is now, I thought. Little did I know that only a few years later virtual reality would render that convenience as obsolete as a Polaroid dick pic. 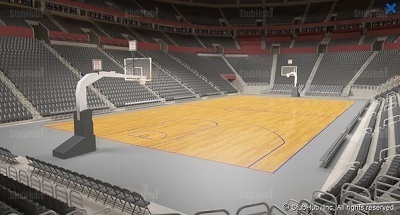 This irrelevant garbage might as well be an oil painting.

StubHub is developing a virtual reality version of seat previews. Meaning, you won’t just get the painfully antiquated picture preview you used to get back in the ancient times (last week). You’ll get a fully immersive, cutting-edge, almost-real sense of what it would be like to actually sit in the specific seat you’ve chosen. It’ll be like you’re there, in the arena, rubbing your butt on every empty seat. You’ll be able to perceive the tangible differences between a $90 seat and the $80 seat a few rows behind it. Now all it needs to do is sit you behind a 6-foot-11 behemoth of a man who has a head the width of an IMAX screen. 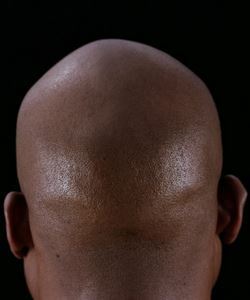 “If I wanted to see this I would have stayed home and stared at my dick.”

Even more exciting is the obvious next step for this idea. Imagine a seat in a stadium or arena specifically for people at home who want to watch a live event through their VR rig. The NBA has already experimented with that idea, and there’s a company out there trying to do something similar with live concerts. Who knows? Fifteen years from now we might all be virtually sitting on the 50-yard-line at the Super Bowl, while in reality we’re eating nachos naked on a toilet.